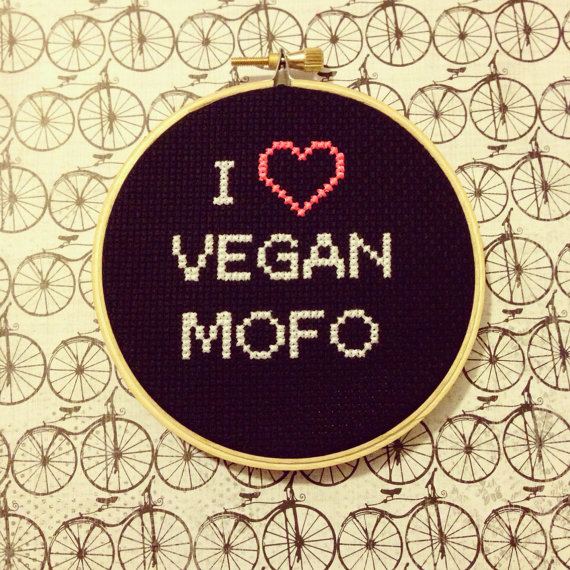 Hi everyone! With the start of the annual Vegan Month of Food aka VeganMoFo  just over a mere week away, I wanted to take this time to reflect on some of our own favorites from 2013.

Reading other vegan blogs and being struck by other people’s designs, creations, skills, writing and most importantly, being awed by their vegan culinary endeavors and purchases (all the UK vegan cheese never fails to get to my heart), is such a swell way to draw inspiration for your own projects and bloggin’ shenanigans. It’s an ever-growing, ever-impressive community that’s constantly changing and doing more and more (again, especially with vegan cheese, hello Miyoko-effect <3!).

One of the most mentioned by my organizer colleagues was the month of jaw-dropping classic German desserts by Mihl at Seitan is my Motor. There were so many bakery-case starring pastries and detailed recipes that you should have a go at!

Here’s a couple more to pique your fancy, trust me:

Now, if you’ve been paying attention to the vegan internets this past year, it should come as no surprise that the newsworthy, tortilla-stockpiling TACO CLEANSE out of Austin, TX not only tops my own list of memories from 2013, but everyone else’s at VeganMoFo-land.

Tacos, people. Tacos. Sandwiches are so dumb (IMO, at the moment).

The Lazy Smurf breaks down the Hows and Whys on her blog here.

Now, I’m not really one for leisurely math, but TACO CLEANSE + all their new vegan food carts (including taco carts, of course) + Capital City + Sweet Ritual pretty much cemented Austin’s status as THE VEGAN CITY TO VISIT IN THE USA…AND BEYOND. What other vegan city in the USA is this exciting right now?!

Vegan diners & bloggers from all across Austin (and again, beyond, in honor of this delicious cultural phenomenon) took part in the TACO CLEANSE, which naturally thought to include dessert:

As someone who’s liked Austin’s vegan taco scene so much they’ve pushed to help move a certain Vida Vegan Con there for 2015, wanting the TACO CLEANSE to return is an understatement. It’s a way of life, right?

Speaking of Mexican goodness, Cadry of Cadry’s Kitchen took us “Back in Thyme” all month long for an always-creative look back at cooking in her own life, often giving a revamped take on some of her all-time favorite food memories and dishes, including these Puffy Nachos:

I can’t quite let tacos go yet…

Another wonderful VeganMoFo spirit comes our friend and fellow organizer Amey. Last year, she took a Noshtalgiac look on her blog, Vegan Eats & Treats!, with drawings, heartfelt stories and just as many appetizing creations. The two featured here come from the tale of family-style Taco Joe’s:

Okay, another one of my favorite personalities in the vegan community lately is Randi of Laughfrodisiac. She had the charm and zest to do a whole month of Veganizing Friends recipes, I kid you not. One of the most memorable of the month, for both Randi and her readers, was Rachel’s monstrous English Trifle:

From the blog: “My main theme for VeganMoFo 2013 is to veganize some of the dishes featured on one of my all-time favorite TV shows, “Friends”. As those of you not living under rocks should know, Monica was a professional chef, so we have some interesting & fancy dishes coming up in the next few weeks. However, I had to start  not with one of Monica’s amazing creations, but with perhaps the most famous dish of the ten years of the series’ run…and perhaps the most famous TV dish of all time (yes I went there): Rachel’s English Trifle, or the Thanksgiving Cockup“.

The thing is, I was just talking about Friends, of all things, with another vegan pal last night, who I really need to point that way.  Read all about it and get the recipe here!

Moving on, because I’m currently inside a chilled coffee shop, regretting my choice of iced coffee and wishing I had a mug of coffee and these to dip in from Veg-Am:

All right, I’ve got to bring it back to Mihl for one dessert!

So, keep in mind: If you’re looking for inspiration & great reads, just spend some time checking out the ‘VeganMoFo’ tags on any of these blogs!

And hey, you’ve got three little days left to officially sign up and participate in whatever form you like. See ya there!